Banned by me for griefing, theft, b&e chat flaming, /he proof, misinformation.
Many pics for much proof. 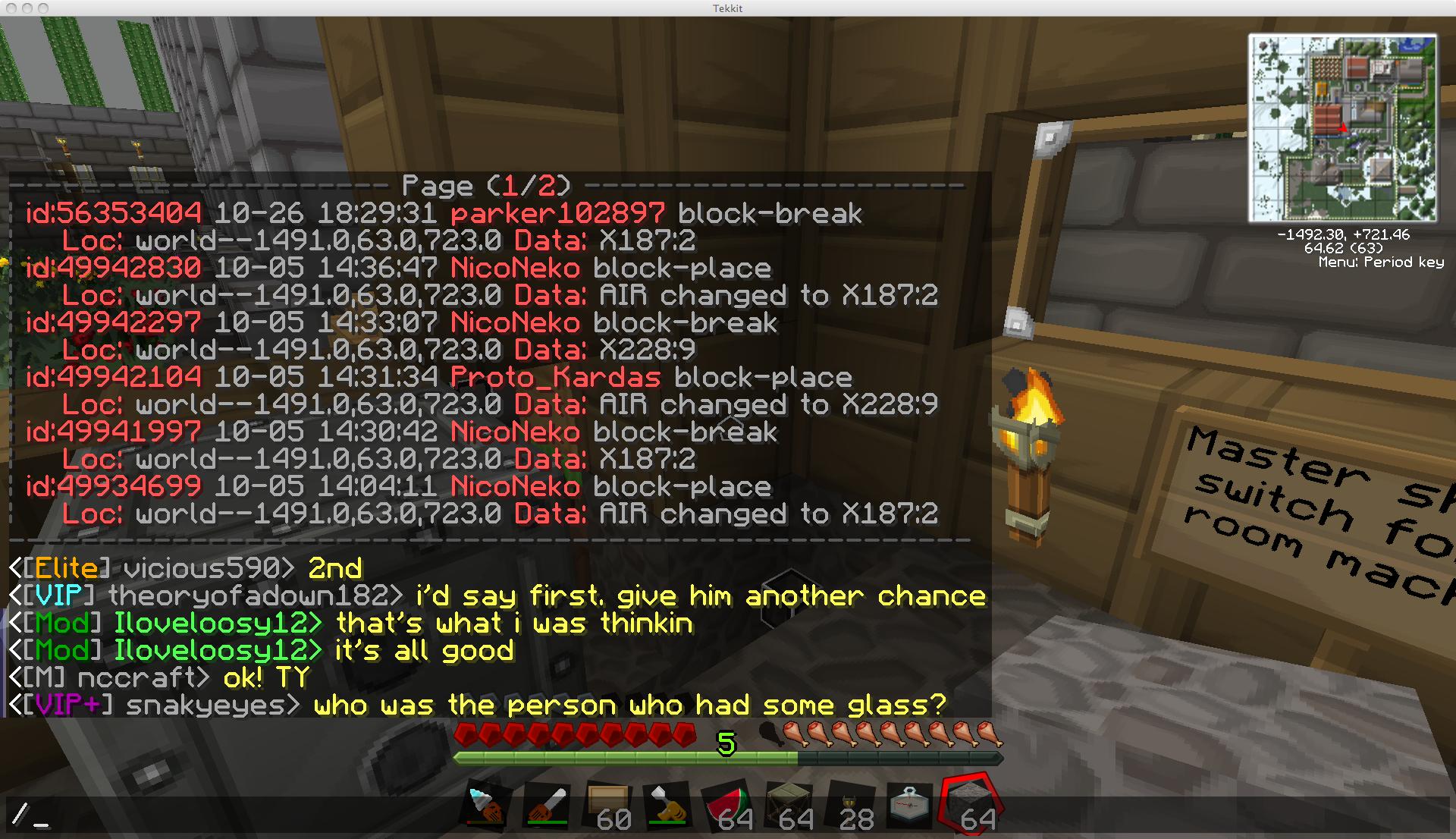 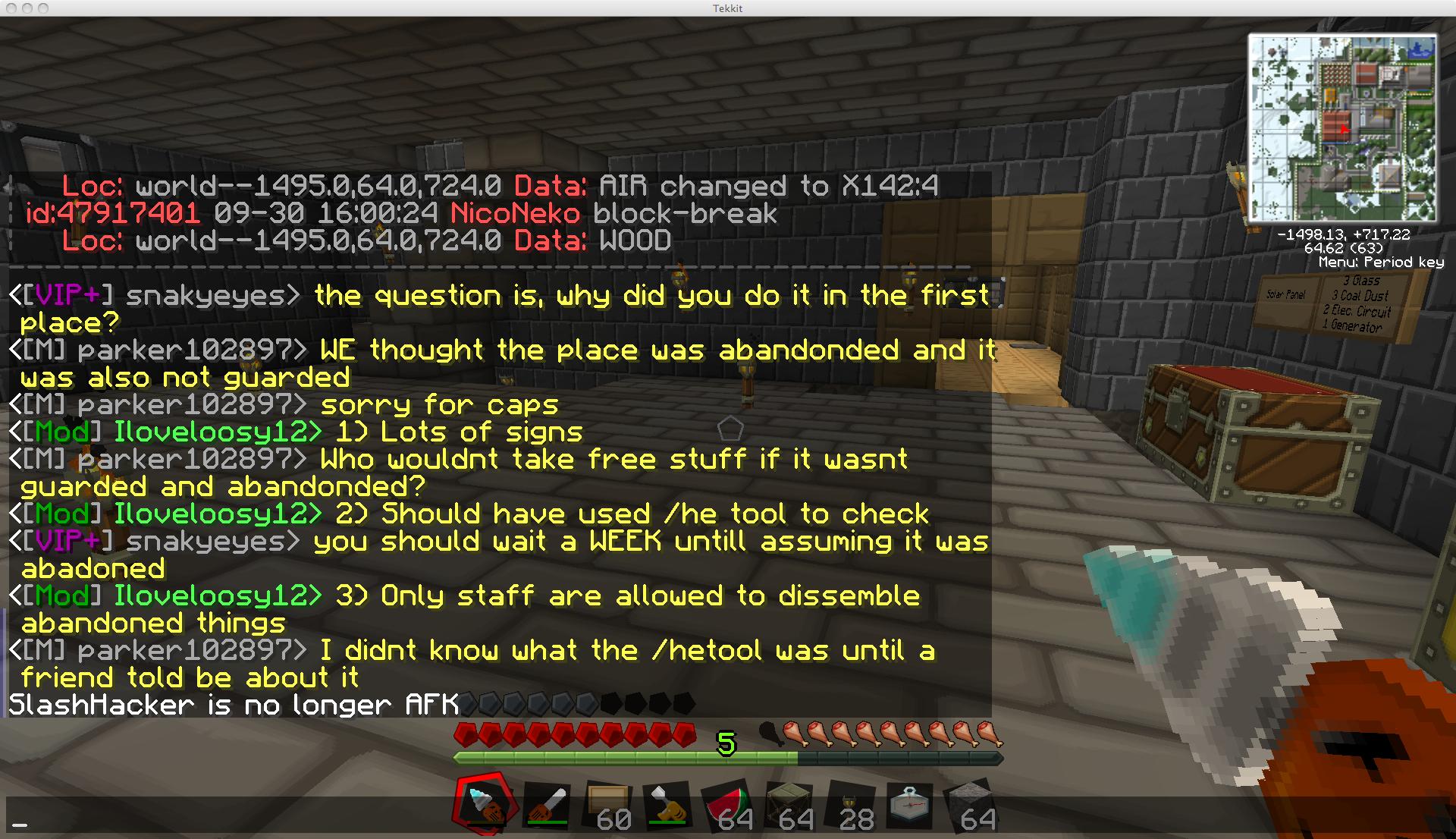 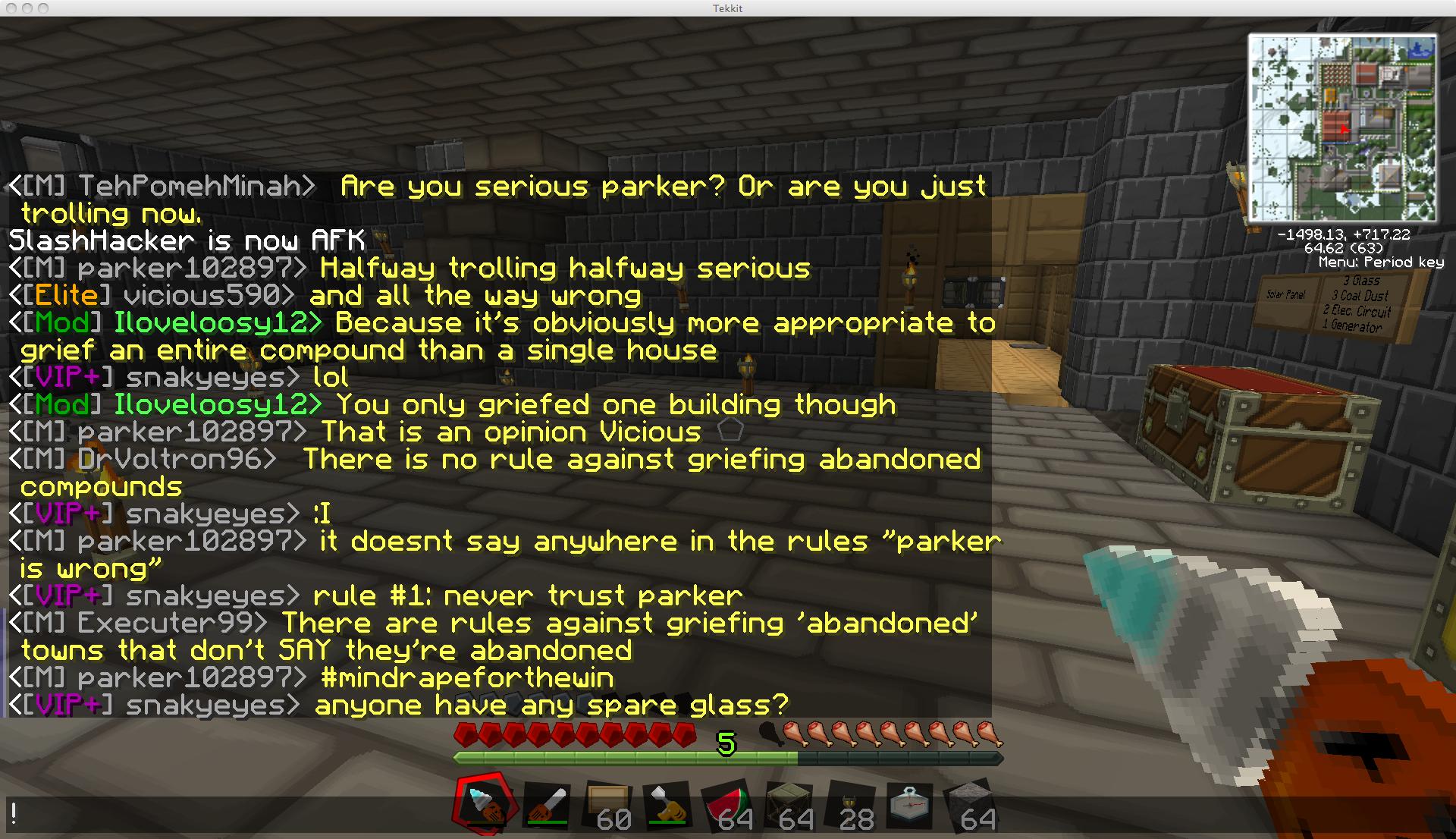 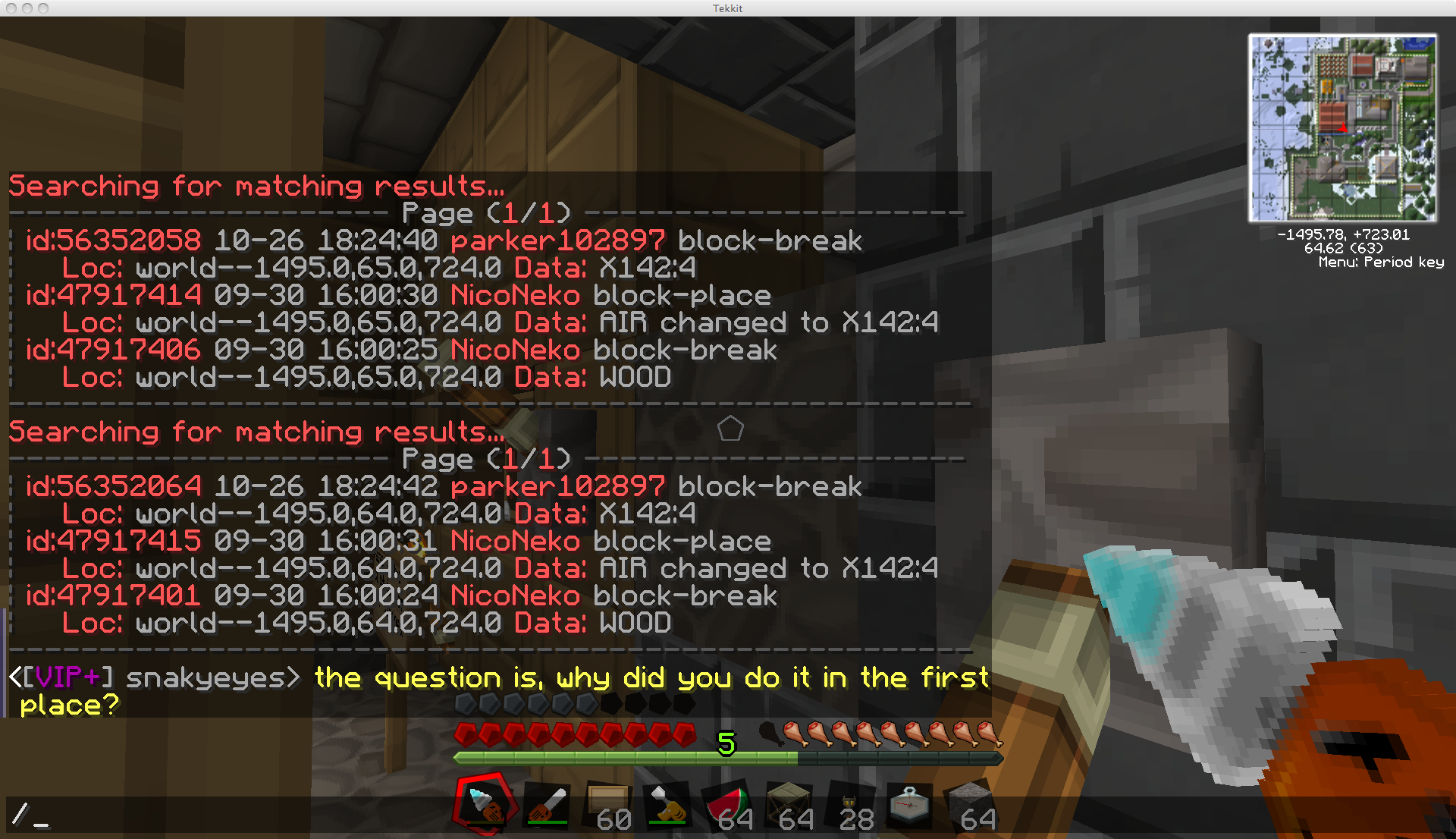 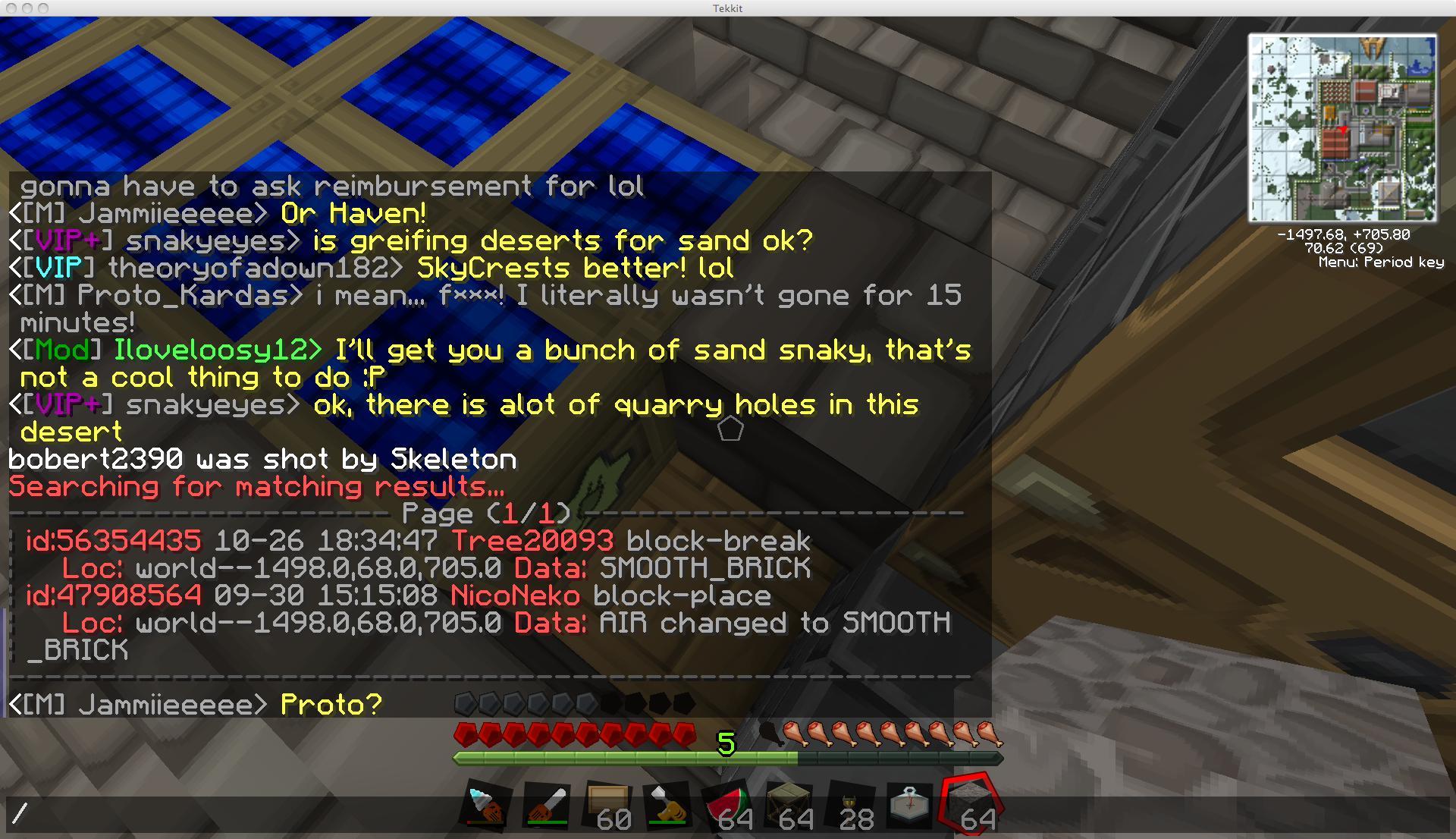 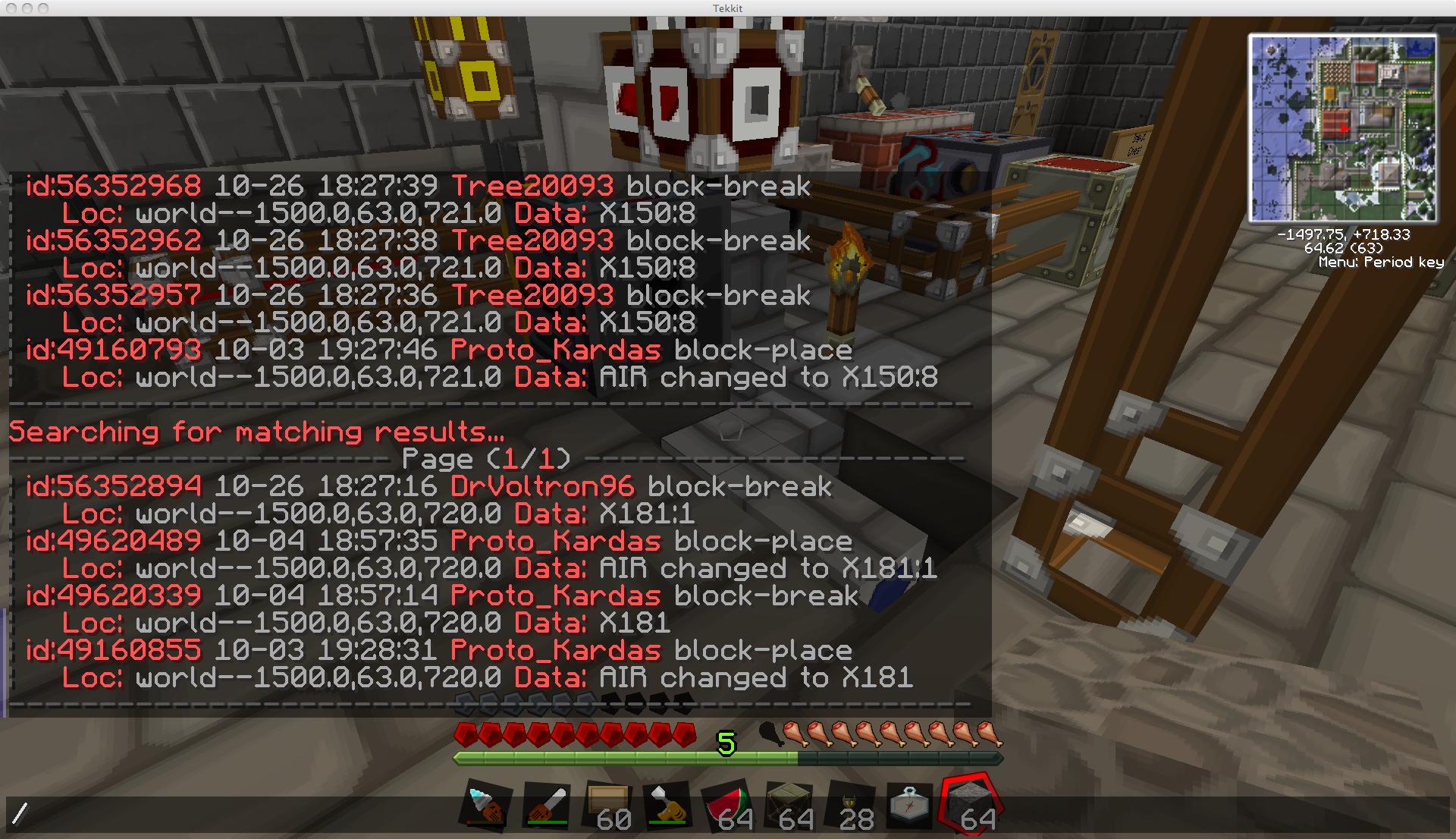 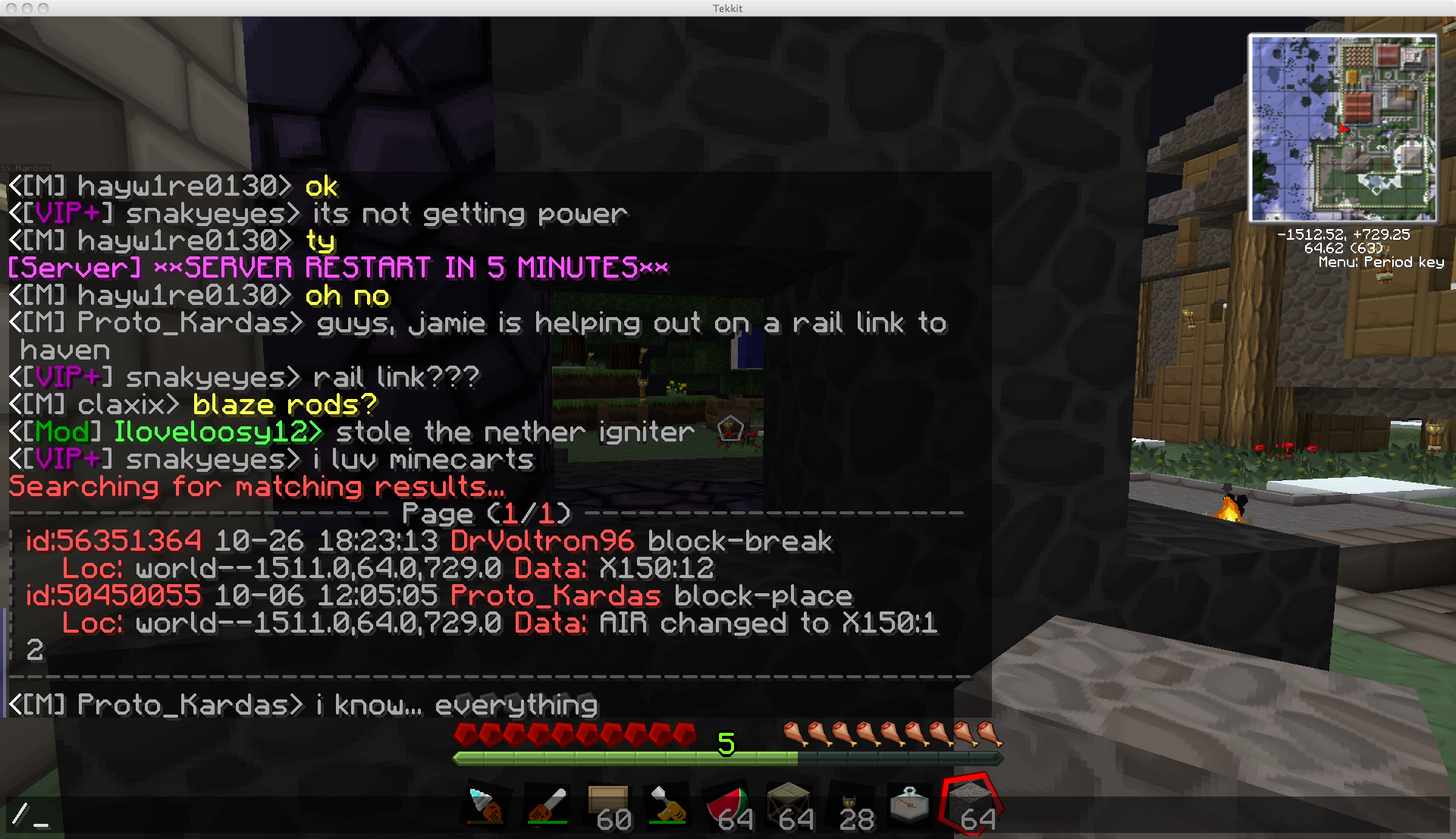 I think the pictures are a bit much because we already admitted of doing the "crime". We did this because we thought that house was abandoned, nothing was locked and of coarse no one in it. Once we found out that stuff was his, parker gave it back, rightfully so, it seems he could forgive and forget but I guess it's up to the admins.

First off Niko is on there more than us. Why isn't he banned? Does he get diplomatic immunity because we were singled out? We get to take resposibility for not only our own actions, but yet more from another? Also, the fact that you "think" we are lying is an opinion not a fact to use for a ban. "Flaming is the act of posting or sending offensive messages over the Internet. These messages, called "flames," may be posted within online discussion forums or newsgroups, or sent via e-mail or instant messaging programs. The most common area where flaming takes place is online discussion forums, which are also called bulletin boards." This is the definition of chat flaming and I never once used any insults against a player. I only EXERCISED MY FIRST AMENDMENT RIGHTS, of which I am being denied of.

my name showed up cause I live there too ._.

Okay so we stole from someone. The point that I would like to get across is that it was unknown to us that the buildings were occupied. The moment we found out we apologized, returned the items, and asked if there was anything else we could do. I feel like that should have settled it. Loosy disagreed. He felt that around 20 min after we settled this; that he needed to step(which he of course has that right as mod) and handle the already dissolved situation. When Loosy started the conversation again most people complained about him starting up the mess again. Why was it necessary for him to ban the three of us when we already returned what we stole? I would really hope that someone understand where I am coming from. I love this server and it would be really disappointing if I lost the right to play here, because of something as minimal as this.
If I offended you Loosy I apologize.

Also Loosy "To lie = to make a false statement with the intention to deceive." This, the definition of lying, is a false accusation. I under no circumstances attempted to blatantly cover up my wrong doings through verbal deception. I came forth on my wrong doing, so I can not be convicted of lying either. Next, the definition of theft- "the generic term for all crimes in which a person intentionally and fraudulently takes personal property of another without permission or consent and with the intent to convert it to the taker's use." Now this yields possible conviction, yet I did in fact return the stolen property. The definition also states that this is a "generic term". This means that certain crimes are outliers and cannot be blanketed by this definition. Now unless you can find me a direct excerpt from a document with notable reputation, I suggest you repel your incorrect accusations. If you do not, you yourself are susceptible to being charged with lying.

Do not take this as a direct attack against you loosy, I have no intent to wreck havoc on your reputation as you have on mine. I only would like to be unbanned or atleast a fair trial.

Proto and Niko's chests and machines were unguarded yet we are held for griefing? For example, you are walking to school and you spy a penny heads up on the ground. You say "Hey! Its my lucky day!" and continue to pocket this unprotected object. Your logic states that if this were to happen you should be arrested for obtaining an unguarded and unclaimed object. When in fact when applied to an everyday life situation makes your unlawful ideas look ridiculous. Now would you like to regain some dignity and correct all of the wrong doings, or would you like to continue down an infinite path of debate with me?

Firstly... you griefed. End of, even if you gave the stuff back tough luck never should have taken it no matter what your excuse. If you have griefed what means you won't do it again, who will trust you? The mods or admins won't, neither the community.
Secondly... You can appeal all you want these little stupid comments going on about your rights and about lies and stuff won't get you anywhere. It is making people more in the favour of the mods and the people you griefed then you. People were sick and probably still are of hearing about this rubbish.
Sorry if i seem all agressive and harsh and mean, but this has been going on for far to long.

So your telling me real life examples can't be compared to minecraft because its a game? Minecraft is a game that simulates life! The game in itself represents a role playing game of everyday life (perhaps exaggerated a little but none the less!) and this "rubbish" is politics. Politics are even included in minecraft such as members, and mods, and Admins which show a hierarchy of power. Their job is to govern over this server and protect it. So again these real life examples are in fact a fantastic piece to use in my defense! I believe I can gain the trust of the majority of people back. I must be given the opportunity though to do so.

Amen to that last one jamie lol

So your telling me real life examples can't be compared to minecraft because its a game? Minecraft is a game that simulates life! The game in itself represents a role playing game of everyday life (perhaps exaggerated a little but none the less!) and this "rubbish" is politics. Politics are even included in minecraft such as members, and mods, and Admins which show a hierarchy of power. Their job is to govern over this server and protect it. So again these real life examples are in fact a fantastic piece to use in my defense! I believe I can gain the trust of the majority of people back. I must be given the opportunity though to do so.

I am done with this too be honest. The rules of this game are very different to that of reality i am afraid and i hope you see that. Your example of a penny was pretty poor in my honest opinion. Here let my lend you a different one just incase this happens again

"Lets say if i walk up to your house in reality, no one is home i assume it must be abandoned. So i call a few of my mates up, we smash some brick out of the walls. Steal some solar panels and i don't know break some glass. It is ok though we gave it back" Suggest you use that next time, might not go as well but at least it is more accurate

To the griefers, try reading the rules again. I would start with number 3.

Locked until Zero can get to this.

The ban's stand firm, you do not touch whats not yours ever.. i don't have time for your pathetic excuses, We have a good community on this server. Also arguing with staff will not win you the argument.

Do you make a habbit of takin stuff which does not belong to you? because i dont. Your penny statement is null and void becuase with the amount of stuff you took would equal to you walking down the street and coming across some ones wallet with there id and 250 quid in it you give it to the police not pocket it, you should of come to us and we would of looked into it. So you reap what you sow so get over it.

Back to The Whale Box
Reply to quoted posts     Clear